Posted by xcwn in Muslim Cults, Neo-traditionalism on December 27, 2012

Well, first of all, it took me a long time to be able to call the group that I used to be in a cult. Naming that is part of my recovery process.

And second, I guess it’s a question of degree as to whether a group is just hyper-conservative and inward-looking or a full-blown cult. The group I was in didn’t start out as a full-blown cult, and a lot of its teachings weren’t all that different from other very conservative groups or leaders that I had encountered before.

The group I was in was a cult, for several reasons:

There are other things as well, but this will do….

Thinking your way out of neo-traditionalism (I)

Posted by xcwn in Muslim Cults, Neo-traditionalism, Stuff they don't tell you when you convert on December 26, 2012

Or (for an alternative title): Up From the Bottle Dungeon.

The bottle dungeon at St. Andrews Castle, Scotland, looks almost ethereal in this photo, due to the floodlighting installed for the sake of tourists…. Ah, isn’t Tradition (TM) just transcendently beautiful—at least when viewed from above, by those who aren’t subject to the full weight of its harsher dictates.

Years ago, I remember reading about bottle dungeons in Scottish castles. These are underground, bottle-shaped prisons, with only one possible entrance, source of air or light—a narrow shaft leading to a hole in the ceiling, which would have been far above the prisoners’ heads. Prisoners would be tossed into the dungeon, or let down on ropes. Escape was well-nigh impossible, except with outside assistance. And I wondered what sort of people those lairds and their families were, calmly going about their daily lives while prisoners suffered and moldered away below.

Looking back at my former life as a neo-traditionalist and how difficult it was to even begin to see my way out of it, I am reminded of bottle dungeons in more ways than one.

As a neo-traditionalist who was also heavily involved in a Muslim neo-traditionalist group (which turned out to be a cult) for some years, I lived in an almost entirely self-referential world. It was built like a fortress. Built to last. And that was not accidental.

It was a mental prison that was self-sustaining. And oddly enough, it was incredibly hard to leave, mentally and psychologically speaking—even once I began to recognize how much harm it was doing to myself and my children, as well as to dear friends of mine.

One of the reasons why this world-view not only drew us in, but was so very durable was its emphasis on certainty and knowledge. We wanted certainty. And what was more, we believed that any faith worth the name should be able to deliver it. We also felt as though we were under siege from the wider society, so we wanted our beliefs reaffirmed. So, we were primed for leaders who would provide affirmation and promise certainty.

END_OF_DOCUMENT_TOKEN_TO_BE_REPLACED

Posted by xcwn in Adventures in recovery, Marriage, Muslim Cults, Neo-traditionalism, Stuff they don't tell you when you convert, The effects on our kids on December 15, 2012

In the last post, I discussed a number of reasons why I (and many of my convert friends) found conservative Muslim arguments in favor of women being stay-at-home wives and mothers convincing, and highlighted some of the ways that deciding to stay home limited our ability (and even, our inclination) to make independent, adult decisions on a whole range of things.

In staying home, we became financially dependent. And, we didn’t chart our own courses as wives and mothers either—there were not only our husbands to answer to, but also various conservative, insular and often quite intrusive Muslim communities. For those of us who became involved in Muslim cults, that goes double.

I became financially dependent, despite the fact that my ex wanted to have both the comfort and convenience of a stay-at-home wife (and mother), AND the benefits of a wife who also brings in some money—though, one who would work in a way that wouldn’t ever inconvenience him. I tried to do that by babysitting from home. That was supposed to be the ideal balance between the need to generate income, and the “need” to be at home with my kids full-time, without in any way falling short of my wifely responsibilities to cook, clean, etc, or my moral responsibilities to wear hijab and avoid working alongside or closely interacting with men. I also hoped that it would protect me from job discrimination and the type of dismissive treatment that often is experienced by people in low-status jobs. After all, I was working at home….

END_OF_DOCUMENT_TOKEN_TO_BE_REPLACED

Posted by xcwn in Adventures in recovery, How we were sold on patriarchal religion, Stuff they don't tell you when you convert on December 15, 2012

During my conversion process, I read several books and booklets written by conservative Muslims that essentially argued that the “Muslim woman” (in an “ideal Islamic society” at least) are far better off than the generic “Western woman.” This is because while “Western” women have to compete with men in the working world in order to survive, (it was argued) Muslim women are respected, protected, and can count on being financially supported by their male relatives or husbands throughout their lives. 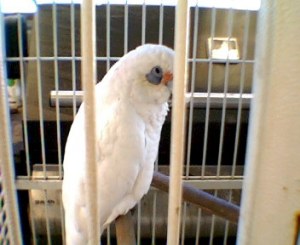 What we were told was liberation turned out to be more like infantilization.
http://commons.wikimedia.org/wiki/File:Unidentified_Corella_in_a_cage.jpg

As time went on, conservative Muslim writers and speakers began to use words and phrases such as “gender equity” and “true liberation” and even “a western feminist’s dream” to describe this vision of what Muslim women are supposedly entitled to.

I (and my convert friends) bought into this vision. And we tried so hard to make it work, for years. Why? And, what was this vision really about? Was it an authentic, indigenous third-world/western religious woman feminist (or womanist) idea, as some claimed? Or was it really about infantilizing and controlling us by limiting our options to make choices?

We were taught that women dedicating their lives to being stay-at-home wives and mothers was “natural” and biologically-based. Different authors/speakers  made this argument in different ways. Some attempted to do so using positive-sounding language and focuses on what (all) women supposedly want and need, arguing that women “naturally” want to be protected by men, and stay at home and devote their time and attention to having children. They quoted western feminists talking about the “second shift.” How is it fair (they asked) for a woman to be expected to work full-time, and then to have to come home and deal with most or all of the housework and childcare?

END_OF_DOCUMENT_TOKEN_TO_BE_REPLACED

How we were sold on patriarchal religion—reason #59

Posted by xcwn in Adventures in recovery, Conversion, How we were sold on patriarchal religion, Race, We owe you an apology on December 12, 2012

Because we knew it all. After having read a few pamphlets, and heard a few inspiring (and carefully vague) talks on “the status of woman in Islam” (as such talks were often entitled back in the early ’80’s).

Let me back up a bit here. Several weeks ago, I received a comment that weirded me out because it could have been written by me years ago.

It was a rather unnerving experience, but also an instructive one.

“I am a convert, who recently moved from Western Europe to Egypt. I hear all the time that women are oppressed here and controled by men. I however don’t see this in my daily life here. Women work, they are doctors, lawyers, scientists, pharmacists etc.
I also dont know any hadeeth that are demeaning to women, actually i know many that show that men should treat women well.
As always, one must differentiate between tradition and religion. The traditions are stuck to cultures, the religion is what the religious books (bible, quran) say. traditions can change as the people change, religion, like God is constant.
I am sure that every man who abuses a woman, inside himself he knows that what he is doing is wrong, he is just too selfish to stop. All persons (with a few exceptions) are born with the knowledge or intuition of what is right and wrong.
What are the parts of quran or the trusted hadeeth that are demeaning to women according to you all???”

END_OF_DOCUMENT_TOKEN_TO_BE_REPLACED

Posted by xcwn in Marriage, Race, Stuff they don't tell you when you convert, The effects on our kids, We owe you an apology on December 12, 2012

My kids are angry. They have lots of things to be angry about—growing up in (religiously-induced) poverty, growing up with a lot of religious restrictions that even some other Muslim kids they knew didn’t have, their father’s actions (especially, his cheating, justified as polygamy), my actions (especially, my conservative Muslim idealism that flew in the face of reality), our inability to live the idealized (and for us, quite unrealistic) vision of the “ideal Islamic marriage/family,” our divorce, the bone-headed judgmentalness of those conservative Muslims who couldn’t keep their opinions about our divorce and how the kids were likely going to be affected by my working and dehijabbing and leaving my marriage to themselves…. 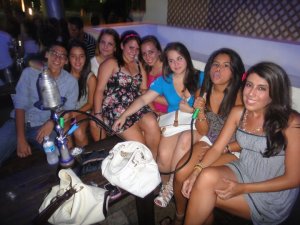 Is there a way to get beyond simplistic, formulaic answers when talking about Muslim teenage rebellion?
(http://commons.wikimedia.org/wiki/File:Hookahin2010lounge.jpg)

There’s teenage rebellion, and there’s teenage rebellion. Some of it is par for the course in the wider society—piercings, tattoos, skimpy or “gangster-ish” clothing—though not acceptable in the conservative community that they were raised in, where such signs of teenage rebellion are sources of stigma for parents (who clearly didn’t manage to “raise their kids properly”). But some types of rebellion can lead to trouble with the law.

END_OF_DOCUMENT_TOKEN_TO_BE_REPLACED

Looking back on my homeschooling experience

Posted by xcwn in Adventures in recovery, The effects on our kids on December 9, 2012

In the last post, I talked about how and why I started homeschooling my eldest child.

Looking back, I can see both positives and negatives.

On the positive side: I and a good friend of mine (also a conservative Muslim homeschooling mother) did our best to provide our kids varied and interesting learning experiences, despite our poverty, lack of access to a car, very limited support even in our own insular, conservative religious community, and the pregnancies/responsibility to care for our infants that tended to limit our mobility. We dealt with these considerable challenges with a can-do attitude and lots of ingenuity. Since God (we sincerely believed) wanted us to homeschool our kids, then it must be possible for us to somehow make it work.

We took our kids outside as much as possible, so that they could experience nature and learn about it in a “hands-on” way. (We lived in a city, so nature wasn’t going to come to us—we had to go out and seek it.) We wanted them to learn the names of different animals and birds, to be able to identify animal tracks, to know that some wild plants are edible and others poisonous, to recognize different kinds of trees… so, we took them out to parks as much as we could. We would take long bus rides in order to get to reasonably “wild” parks, pushing strollers and laden with diaper bags and packed lunches and whatever art or other supplies we thought we would need.

We took them to museums, the zoo, a kids’ farm and historic sites as much as we could. Entrance fees were a problem, given our poverty, but we took advantage of discount coupons, family passes and free or reduced-admission days.